Rick loves showing our babies or showing for other people. He has championed out several different breeds. They just love showing for him. 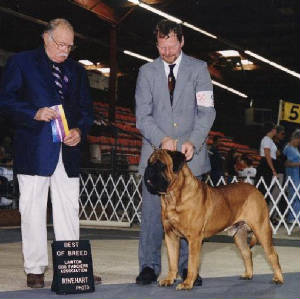 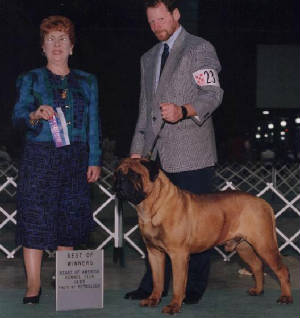 TAILWYNDE’S HOTEL SIERRA “Hot Shot” TAILWYNDE’S BART SIMPSON x TAILWYNDE’S JUST DESERTS.
He was a very special loveable dog. We got him when he was already 5 yrs old or so. We lost him to heart attack at an early age. There was an immediate special bond between He and Rick. It was a devastating loss for us.
Tailwynde’s Hotel Sierra Conformation – Awards Processed
Number of Points 7
Number Major Wins 1
Number Major Judges 1
Total Number Judges 3 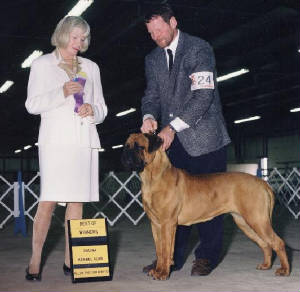 Bridgett, CH Cc’s Money Matters
AKC Conformation – Awards
Number of Points 15
Number Major Wins 2
Number Major Judges 2
Total Number Judges 7
Bridgett gained her AKC and International Championship and was Rick’s first bred by champion. She was a very sweet and loving bullmastiff as were all of her littermates. 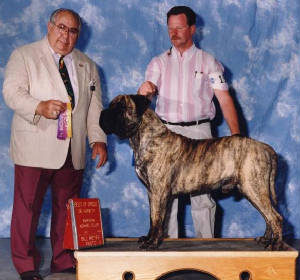 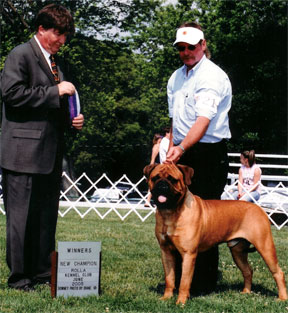 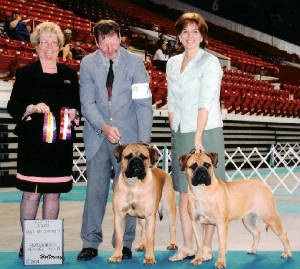 Ruby & Bob won Best of Breed and Best of Opposite at the Salina KS Show Fall 2004 Yeah! They were 13 months old. 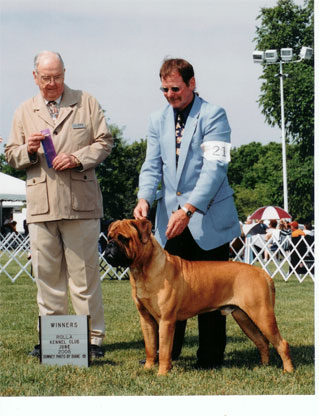 Bob finished his championship with 3 back to back majors.
We are very proud of him.
We do have frozen semen for purchase on Bob. CH CC’s Beast Of Burden. And Jr. GRCH CC’s Get Off Of My Cloud.
↑